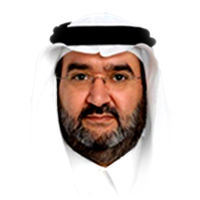 Born in Makkah, Saudi Arabia in 1959, Dr. Abdulaziz Sager is chairman and founder of the Gulf Research Centre. He is also President of Sager Group Holding in the Kingdom of Saudi Arabia which is active in the fields of information technology, aviation services and investments.

In November 2003, Dr. Sager was appointed as a member of the Makkah Province Council. In addition, he serves as a member on the advisory board of the Arab Thought Foundation; the Geneva Centre for the Democratic Control of Armed Forces (DCAF); the Faculty of Economics and Administration of King Abdulaziz University; the Ministry of Higher Education, Saudi Arabia; the Geneva Centre for Security Policy (GCSP); the German Orient Foundation; and on the advisory group for the 4th Arab Human Development Report for the United Nations Development Programme (UNDP).

Dr. Sager has special research interest in Gulf strategic issues and is a regular contributor and commentator to international and regional media. He also regularly participates in regional and international forums and conferences held on issues relevant to the Gulf region. He is the author of numerous publications including Combating Violence & Terrorism in the Kingdom of Saudi Arabia (Gulf Research Centre, May 2004); GCC Political & Economic Strategy towards Post-War Iraq (GRC, April 2004); Reforms in Saudi Arabia: Challenges and Feasible Solutions (GRC, September 2003); “Political Reform Measures from a Domestic GCC Perspective,” in Constitutional Reform and Political Participation in the Gulf, Abdulhadi Khalaf and Giacomo Luciani, eds. (Dubai: Gulf Research Centre, 2006); “Political Opposition in Saudi Arabia” in Saudi Arabia in the Balance: Political Economy, Society, Foreign Affairs, Paul Aarts and Gerd Nonneman, eds. (London: Hurst & Company, 2005); Energy Shapes new Gulf Security Architecture, Journal of Middle Eastern Geopolitics ( 2006); and “Why for all its problems, the EU is still a model for the Arab world,” Europe’s World, no. 14, Spring 2010. He has also been the chief editor for the Gulf Yearbook (2003 to 2009 editions).

Dr. Sager holds a PhD in Politics and International Relations from Lancaster University and an MA. from the University of Kent, United Kingdom.